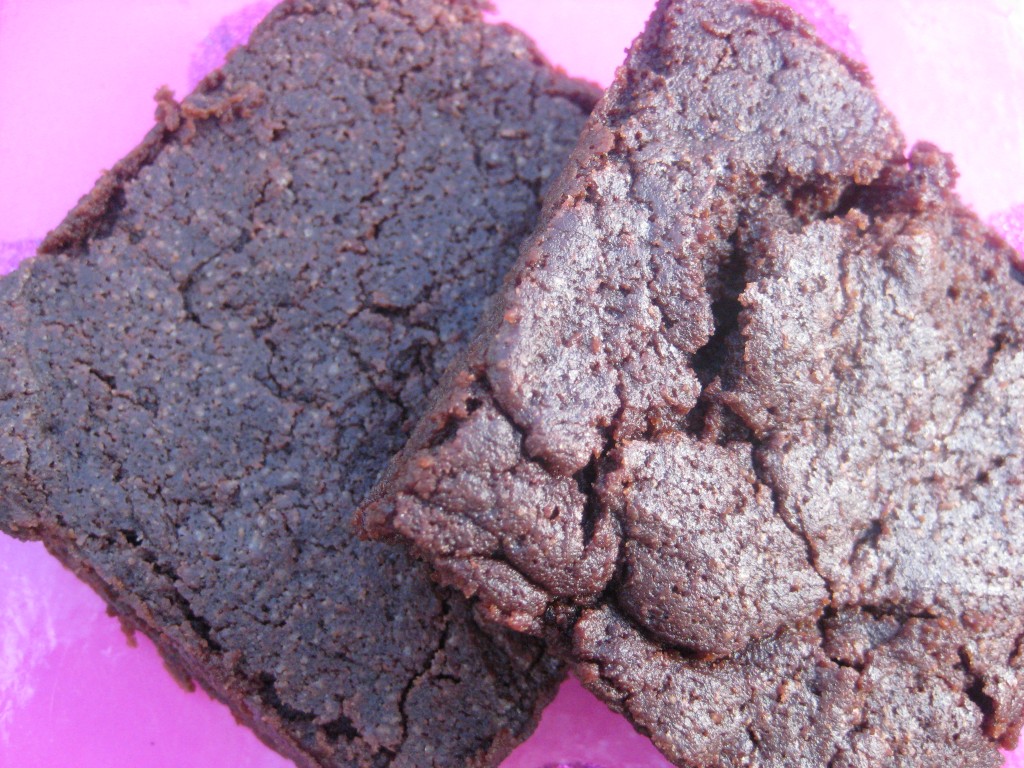 Does adding extra flour to brownies make them chewier, cakier, or just drier?

Just like they teach you in elementary school, you’re supposed to isolate a variable in order to test your hypothesis.  In this case, that means that I keep my recipe, method, and temperature exactly the same each time, except for one change.

This time, the only thing that I’m changing in my classic chocolate brownie recipe is the amount of flour.  I’ll be doubling it from 1/2 cup in an 8-inch pan to 1 cup.

I’ve seen brownie recipes that include this much flour before, and I’ve always stayed away from them because I was afraid they would be too dry or tough.  It turns out that my instinct was only half right.

The edges (about 1 inch around the outside) are definitely drier than the original recipe, and they have a toughness about them that isn’t what I was looking for.

However, the center of the pan of brownies was interesting.  The centermost brownie felt dense and substantial on the tongue, with a satisfying chew that reminded me of a warm cookie, but slightly drier.  Even the top of the brownies had a bit of the characteristic crinkle of a cookie.  Despite that little bit of “cookie-ness,” it was still a brownie through and through.

Although I expected the edges to be chewier, it turned out that the edges were drier and more crumbly, while the center was dense and chewy.

The real magic would be to figure out how to reproduce the center texture from edge to edge- with the moisture level amped up just a bit- so that the brownies wouldn’t need to be trimmed.

Perhaps a slightly shorter bake time, or a lower cooking temperature on a lower oven rack would do the trick.  As I found out the next day, these brownies dry out very quickly and get crumbly the second day.  They probably need a little more fat, in the form of butter or an egg yolk.  That will have to be a future experiment.

I hope this helps you with your brownie baking.  You might also enjoy reading about adding extra eggs to brownies, or how to tell when brownies are done.

If you’ve observed any interesting effects from changing ingredients, method, or temperature, please let me know in the comments below.  I love to learn from other bakers!