Did you know that the TV version of Alton Brown Chocolate Chip Cookies is different than the one published online?  Get the recipe that actually works! 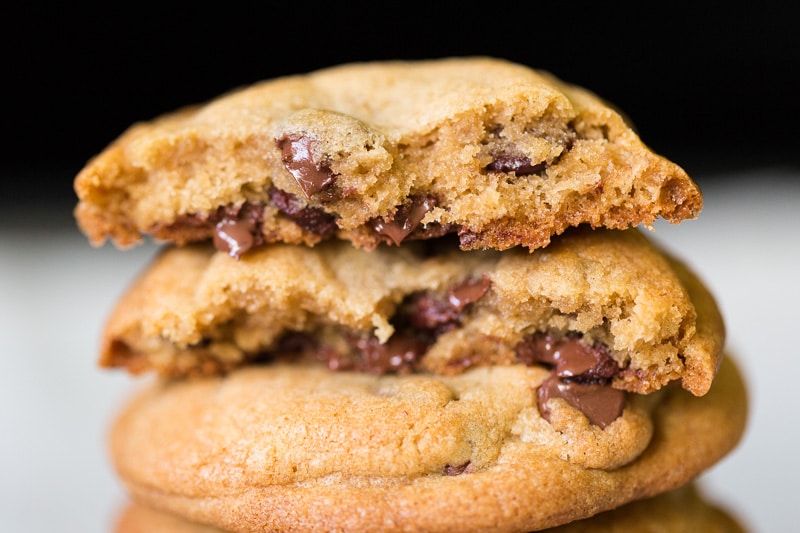 (…and why his doesn’t, if you follow the TV directions.)

I carefully read through the reader reviews of each recipe on the Food Network website, quickly discarding the “thin” cookie recipe and focusing in on the puffy versus the chewy.

The puffy chocolate chip cookies didn’t seem to fit the bill.  They were made with butter-flavored shortening (I’m an “real butter” gal, myself) plus cake flour, indicating that these cookies would be more on the cake-like and tender side.

Zeroing in with laser-like intensity on the chewy recipe, I noticed a certain trend in the reviews.  Astute readers had noticed that the online recipe in written form differed from the recipe demonstrated on TV.

What’s different in the video than in the written recipe published on the Food Network website?  I’ll tell you. 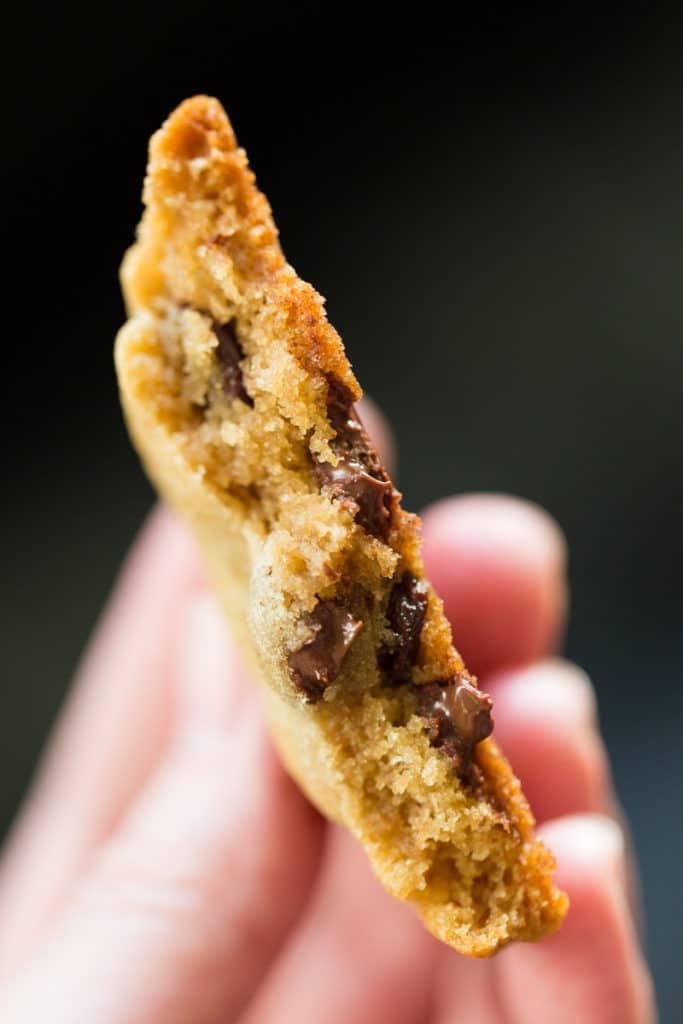 Needless to say, these inconsistencies caused consternation among the reviewers.  Bakers who followed the multiple rack instructions were often disappointed by inconsistently baked cookies.  I found this to be true not only for the reviewers on the Food Network site, but also on various blogs in which a blogger tested out the Alton Brown chocolate chip cookies.

Others who skipped chilling the dough found that their cookies spread too much, preventing them from being as thick as desired.

In order to troubleshoot these issues, I went to work on reverse engineering what the culinary authorities had to say about chocolate chip cookie recipes.

By doing so, I found a pattern of what works to make chocolate chip cookies properly chewy and thick. 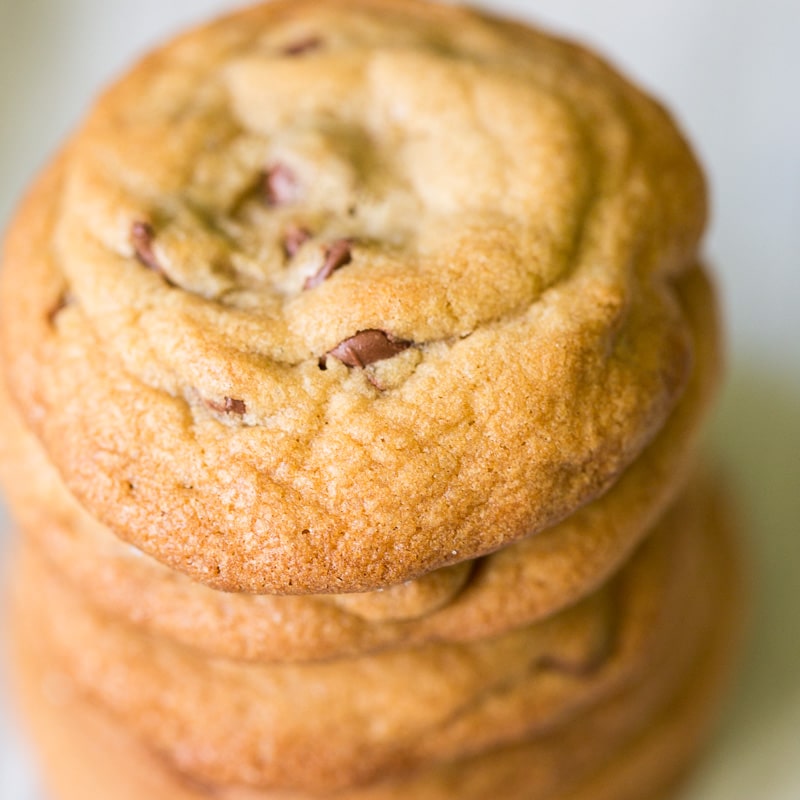 Source: ChefTalk.  The debate on ChefTalk demonstrates that some of the very things that encourage chewiness also encourage spreading.  Leading us to the next point…

How to Keep Chocolate Chip Cookies Thick by Preventing Spreading

Now that we know how to keep chocolate chip cookies both thick and chewy, which of Alton’s recipes do you follow?  The TV recipe, or the written recipe?

After studying both, I went with the TV version of the ingredients because it uses volume measurements.  After all, not everyone has a kitchen scale.  I used the instructions from both sources that most closely fit with what we already know about what makes cookies both thick and chewy.

To be on the safe side: I whisked the liquids before adding to the bowl, I chilled the dough, and I only baked one cookie sheet at a time.

You can see for yourself how the first attempt turned out: flat as a pancake. 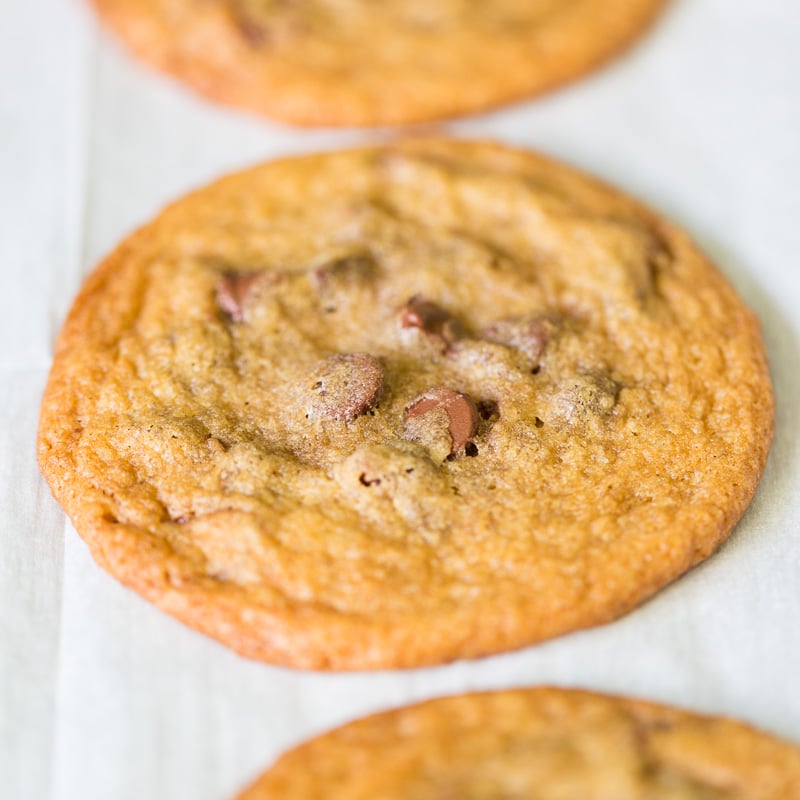 What the heck happened?  They’re flat, greasy, and spread all over the place.  Not a bit like the thick cookies pictured on Food Network.

That much of a difference in flour makes a huge difference in how cookies turn out.  So, even if you followed the recipe exactly, you’d end up with flat and greasy cookies because there’s simply not enough flour in the recipe. 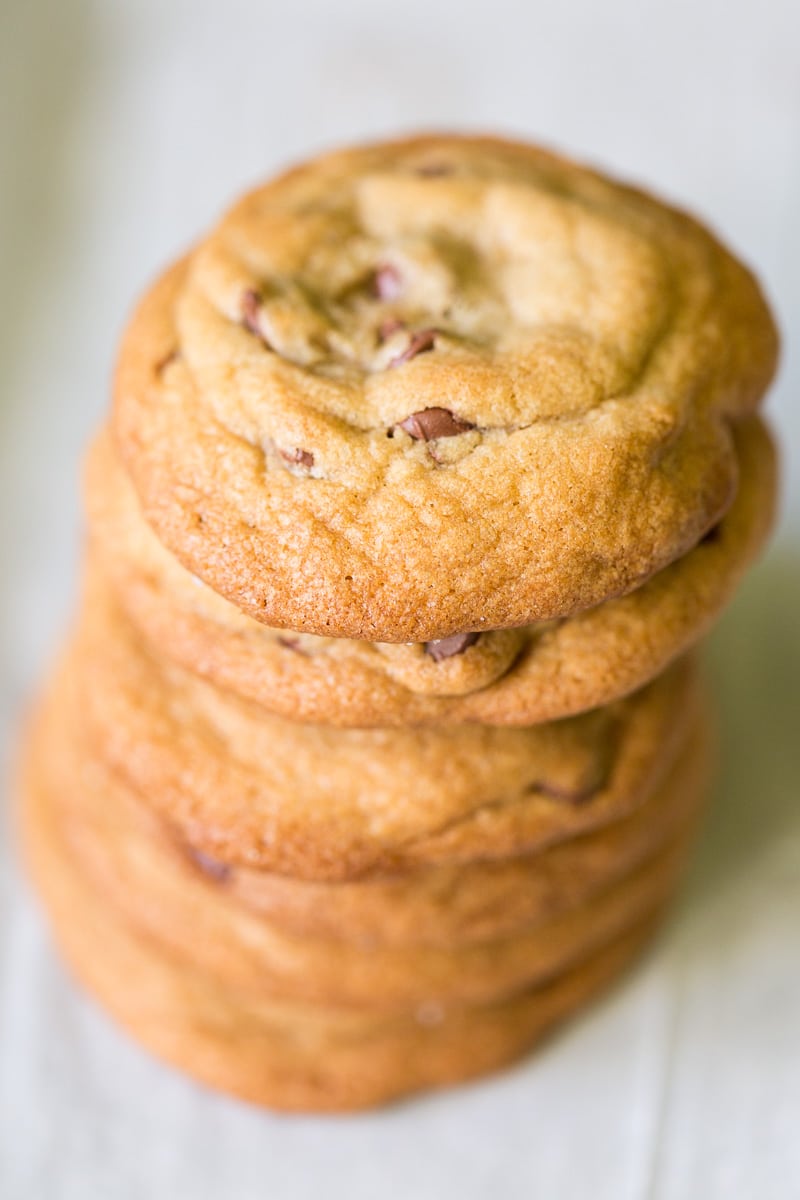 See?  Enough flour equals thick and chewy cookies.  Since most of us measure with cups, I’ve carefully measured the true and correct amount of flour needed for this recipe, so you can be confident that it will work.  I’ve also added a little garnish that I learned from the famous New York Times chocolate chip cookies: salt!  Trust me when I say that salt is magical on chocolate chip cookies.

Alton, and Food Network, if you’re listening: please test your recipes before airing them on national television.  My recipe testing rates are reasonable, so just have your people call my people.  I’ll be waiting by the phone.

Thanks for stopping by! 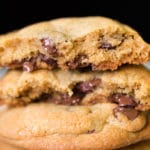 Did you know that the TV version of Alton Brown Chocolate Chip Cookies is different than the one published online? Get the recipe that actually works!

Measure carefully for best results.  For flour, baking soda, or salt, gently spoon it into the measuring cup or spoon, then level the top by scraping across with a knife.  For brown sugar, fill the measuring cup and very gently press down to lightly pack it in.