This post contains affiliate links for Amazon shopping.  When you shop through them, a small commission supports this site at no cost to you.  Thanks!

Produced by the Baked bakery in Brooklyn and featured as one of Oprah’s favorite things, this brownie recipe is notable for several things:

I’ve made these, and I can say that they are very good, especially if you like brown sugar.  They have a quality that makes you want to eat more of them; I think it’s because the texture is just a bit lighter than fudgy.  This recipe is also featured in the beautiful cookbook Baked: New Frontiers in Baking

Another famous bakery produces another famous brownie; but this time, it’s not without controversy.  Some reviewers claim that the Fat Witch brownie recipe from Fat Witch Brownies: Brownies, Blondies, and Bars from New York’s Legendary Fat Witch Bakery

bears no resemblance to the brownie sold at the actual bakery.  Since I haven’t ever been to the Fat Witch bakery, I can’t solve this brownie mystery.

This recipe appears on the back of every box of Baker’s Unsweetened Chocolate.  If you’ve eaten brownies from scratch in your life, chances are that at some time you’ve eaten Baker’s One Bowl Brownies.  They’re on the fudgy side, with a level of chocolate flavor that’s right in the middle: not very strong, not too mild.  They are a classic melt, dump, stir, and bake recipe that’s very easy even for a novice baker to produce.

It’s very possible that I’m biased about this one.  Once you’ve tried my Ultimate Deep Dish Brownies, you’ll never go back to regular brownies, let alone a box mix, ever again! 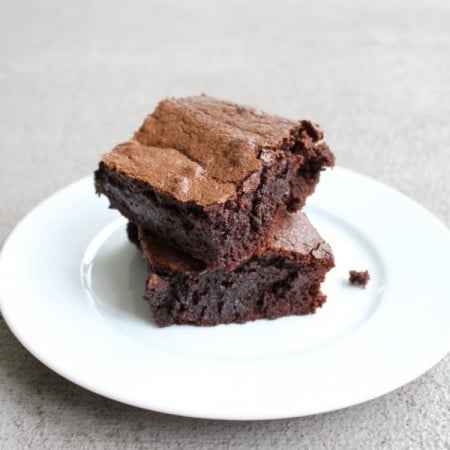 What do you think is the best brownie recipe in the world?