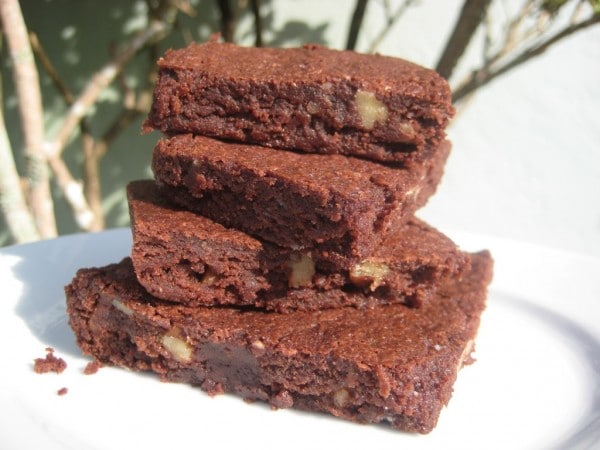 These chewy cocoa brownies have a bit of a backstory.

It was in the final experiment- adding extra sugar- that I cracked the chewy brownie code.  In that post, I promised that I was going to post the ultimate chewy brownie recipe on November 16, 2014.

This recipe is a slight detour from that path.  The ultimate chewy brownies will utilize unsweetened chocolate, which got me to thinking about making chewy brownies with cocoa.  Would extra sugar have the same effect on cocoa brownies as it does on chocolate brownies?

So, I pulled out my copy of Alice Medrich’s Bittersweet, which has a very handy chocolate conversion guide.  Alice recommends that for every ounce of unsweetened chocolate, you substitute 2 tablespoons plus 1 1/2 teaspoons of unsweetened cocoa powder, plus 1 tablespoon of butter.  I compared this to the chart on the back of my canister of Hershey’s Natural Unsweetened Cocoa Powder, which recommends 3 TB of cocoa plus 1 TB of oil or shortening.

Yes, it did.  These cocoa brownies were definitely chewier than the average cocoa brownies, especially around the edges.  They were not as chewy as those made with unsweetened chocolate, but that’s because they didn’t have the cocoa butter to provide extra firmness.  When cocoa powder is used in this particular recipe, the resulting brownie will be slightly crumblier because the fat is almost entirely dairy butter, which provides less structure than cocoa butter.  They were chewiest on the day of baking, and slightly softer the next day.

With their chewiness, fudginess, and distinct cocoa flavor, these brownies were all around delicious, and I highly recommended them for cocoa brownie lovers.

And don’t forget to come back for the Ultimate Chewy Brownies! 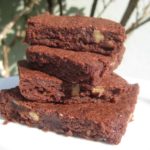 Brownies will be chewiest on the day of baking, and will soften slightly the following day.