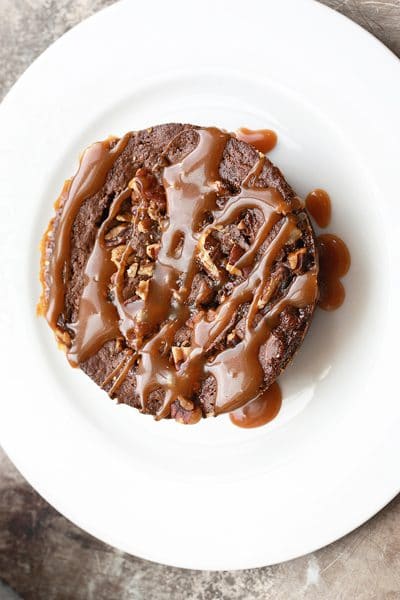 By Katrina of Kitchen Trials

I am thrilled to be hosting another guest blogger with a delicious turtle brownies recipe!  This time, it’s Katrina from Kitchen Trials.  Katrina is a former graphic designer and current stay-at-home mom of three who spends her “free” time getting better at cooking- and living- on a budget.  I love Katrina’s blog because she keep it real and her recipes are not only delicious but very doable!  Please stop by her blog and be sure to follow her on your favorite social media.

Hi, I’m Katrina from over at Kitchen Trials.  I was beyond excited when Katie asked me if I wanted to guest post for her over here at The Perfect Brownie. Any excuse for me to make something sweet is welcomed, and brownies are revered in this house (it was the first thing I ever made for my now husband, waaaaay back 14 years ago in high-school).

After a bit of brainstorming with my cousin over exactly what would make the PERFECT brownie (to us, of course), we decided that there had to be nuts, and there had to be caramel, and they had to be both crisp and chewy. To make sure everyone gets some crisp bits, I made the brownies in little individual sized tins (a throw back to the brownies roots), but it will work just as well in an 8″ pan.

You could also substitute a store bought caramel sauce, but if you’ve got an extra ten minutes, I really recommend making your own. It’s way easier than you probably realize, and just tastes so darn good. Also – it keeps for 2 months in the fridge, so you can always have a little extra on hand. I hope you guys enjoy this Crisp & Gooey Turtle Brownies recipe as much as we have at my house.

PS: Check out one of Katrina’s favorite recipes, these amazing Best Ever Cinnamon Rolls!

Photos by Katrina of Kitchen Trials

Previous Post: « Homemade Brownie Mix in a Jar – Gift Recipe | #SundaySupper
Next Post: Bake My Brownies: In the Kitchen with British Mum USA »