Potato latkes should be nice and crispy on the outside with a pillowy soft inside. This recipe is easier than any other recipe and it makes perfect latkes!

In the taxonomy of all thing potato-y and fried, latkes are a flat pillow of potato shreds bound with eggs and a bit flour, and leavened with a touch of baking soda for fluffiness.

They get nice and crispy on the outside, but when you bite through the crispiness, you get into the fluffy, pillowy part.  Pure heaven.

I did not know, until I looked it up, that the original pancakes served at Hanukkah were actually made with cheese!  Check out what PBS has to say.

Potato latkes are a more recent Ashkenazi invention that gained popularity in Eastern Europe during the mid 1800s. A series of crop failures in Poland and the Ukraine led to mass planting of potatoes, which were easy and cheap to grow. But before potatoes came on the scene, the latke of choice was cheese.

The full historical story of latkes is a fascinating journey of how an Andean tuber crossed the Atlantic and became incorporated in latkes, potato pancakes, and other cultural variations.

When to Serve Them

Traditionally, latkes are a side dish.  However, that doesn’t mean you can’t get creative.

They make a delicious breakfast food or an appealing snack or appetizer.  You can even make mini-latkes for a bite-sized treat. 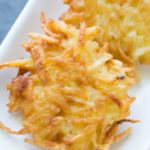 Potato latkes should be nice and crispy on the outside with a pillowy soft inside. This recipe is EASIER than any other recipe and it makes perfect latkes!

To make these potato latkes gluten free, substitute your favorite gluten free flour (I've used a gluten free all purpose mix and also sorghum flour successfully) and ensure that all your other ingredients are gluten free.

Looking for something oven-baked rather than fried?  Try these crispy oven potatoes!