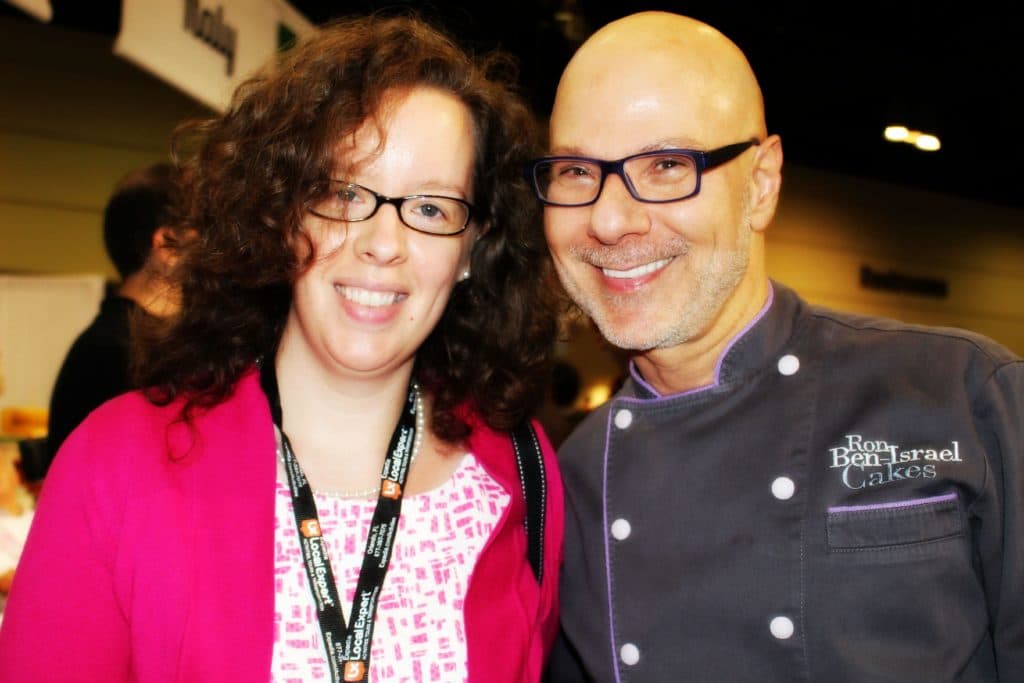 Who Is Ron Ben-Israel?

I wasn’t exactly sure what to expect when I sat down to chat with Chef Ron Ben-Israel, owner of Ron Ben-Israel Cakes in New York City and the star of Food Network show Sweet Genius.  I knew that he’d been a judge on Cake Wars and a guest star on many other cooking shows.  I’d also heard about his forthcoming show, Halloween Baking Championship.

Having seen his work on Sweet Genius and Cake Wars, I still felt unprepared.  We all know that the personalities we see on television can have little or no resemblance to the genuine person.  I hope that by digging into some earlier articles I’d be able to get closer to the truth.

Of course, using this method to discover the true Chef Ron was about as helpful as watching television had been.  One article, titled “Ron Ben-Israel Is the Scariest Man On Television,” described Ben-Israel as “a cross between Fringe’s Observers—chromelike baldpates whose alienlike eyes skim over the action but never quite connect with it—and Austin Powers’s Bond-villain spoof Dr. Evil, given their similar physical appearances, fondness for wearing purple-blue and self-serious natures.”

However, “Chef Ron of ‘Sweet Genius’ Is Not What You Think” claimed that “Ron was a pure delight with a sense of humor that quickly endeared him to me as well as everyone he meets.”

So which was it?  Dr. Evil or Doctor Snuggles?

The suspense was getting to me.

When I finally hit the road to attend The Americas Cake & Sugarcraft Fair at the Orange County Convention Center in Orlando, FL, I had a page of questions written out and no better idea of the man to whom I’d be asking them.  Upon arrival, the endless oversized corridors of the convention center lent a dreamlike quality to the long walk to reach the convention area.

After checking in and milling around the show floor for a few hours (more on that in my upcoming trip report), it was time to head to the media room for the interview.  I took my place at the media table alongside fellow bloggers Robin Wilson of Simply Southern Baking & Living, Terri Truscello-Miller of Love and Confections, and Thelma Tomby of Escola de Bolo.  (Kelly Green of Sea World Mommy had planned to attend, but kindly passed along her invitation to me when she learned she would be unable to attend.)

Ben-Israel was escorted into the room and sat down directly to my left at the large, round table.  Utterly unlike Dr. Evil, his face was calmly pleasant yet alert, his manner indicating intelligence and a quiet sense of humor.  I hesitate to confess this, but Ben-Israel’s air of gravity combined with the almost hidden sparkle in his deep-set eyes immediately reminded me of a classic illustration of Santa Claus.

I’m not sure what Ben-Israel would think of being compared to Dr. Evil and Santa, because I wasn’t quite brave (or crazy) enough to ask that question.  Other than that, here are the highlights of what was said.  Conversations have been edited for length and clarity.

Cake photos are courtesy of Ron Ben-Israel Cakes.  Look closely at those flowers; they’re made of sugar! 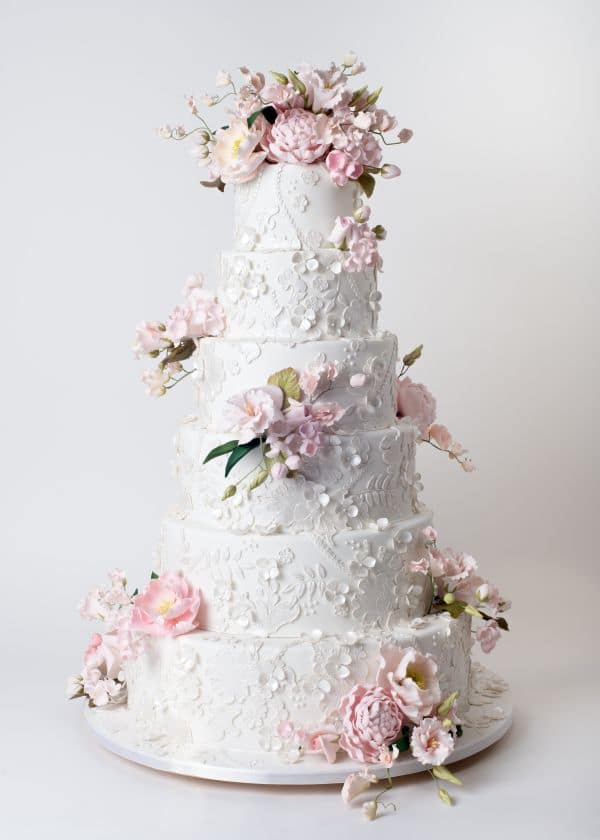 Katie Moseman:  I saw on your website that you sometimes transport one of your cakes halfway across the world.  What does that moving process involve?  How do you keep the cake in one piece?

Ron Ben-Israel:  It’s very complicated.  We had a cake that looked like an artwork and was transported to Miami.  That’s about a 22 hour drive.  Of course, cakes have to be structured in a certain way to make them stable.  But we do it very differently [than many other bakeries].  We use the same moist cakes; we don’t use any shortening, or anything like that.  The reason the cake survives is because it’s refrigerated.  We refrigerate all our cakes because there’s a lot of butter, and the butter hardens.  And then we finish them with Satin Ice, and the Satin Ice is refrigerated.  So it’s very, very stable. 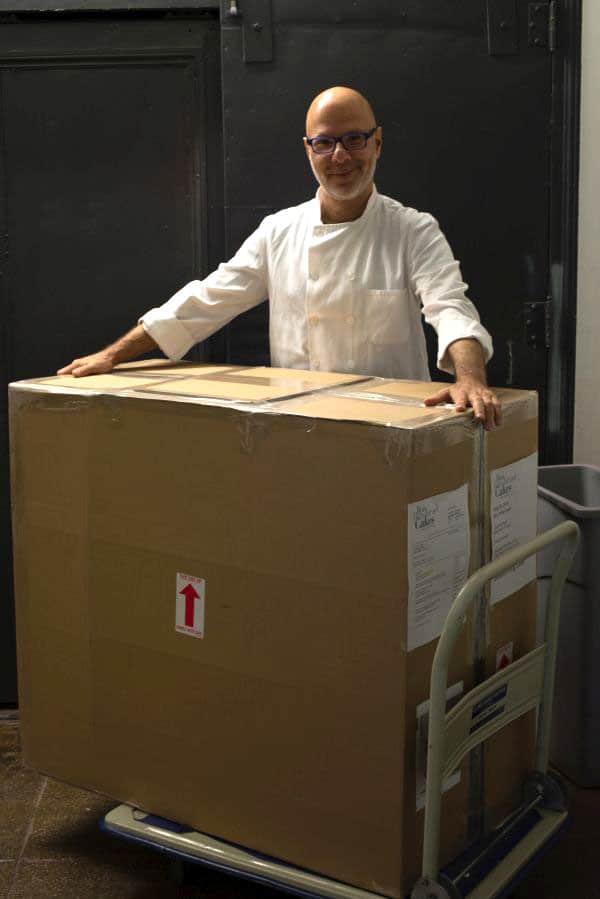 We build crates, either with cardboard or wood, and they go into trucks that are refrigerated.  The trucks drive all the way to Miami, California, and so forth.  It’s all possible, but it’s expensive.  Either the cake [has to be] dry, or it’s moist and it has to be refrigerated.  Unfortunately, most people who do cakes don’t bother with refrigeration.  But I think that’s very important. 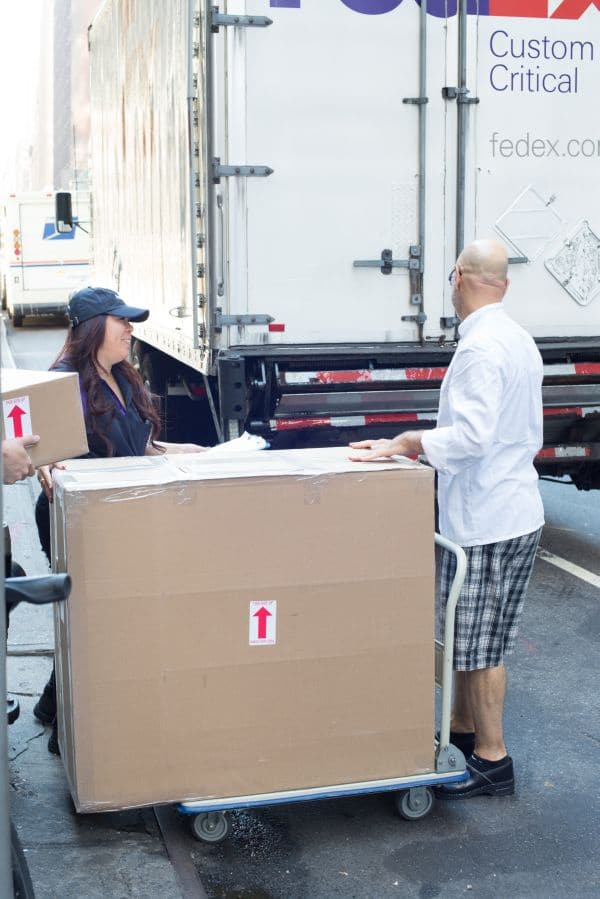 The thing is, people call often and say, “Oh, I live here and here [indicating far away], and I want your cake.”  Most of time, they have no idea how much the cakes cost and how much it costs to transport them.  Most of the time, we just recommend somebody local. 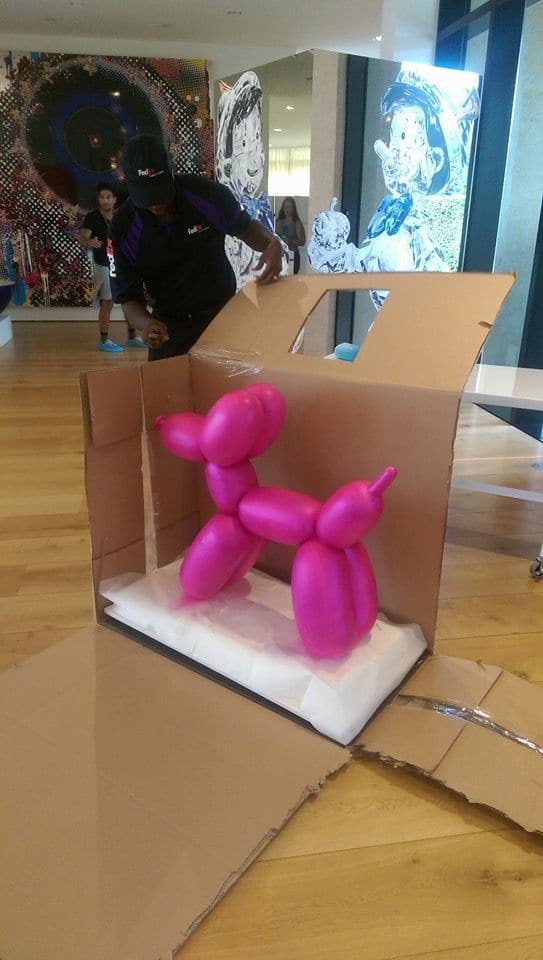 And then, with flying, obviously it’s faster than driving, but private planes are usually very narrow.  Many times there’s not enough space between the seats.  It sounds fabulous when somebody says, “I’ll send my private plane,” but it’s not always possible.  But we have made it work with helicopters. 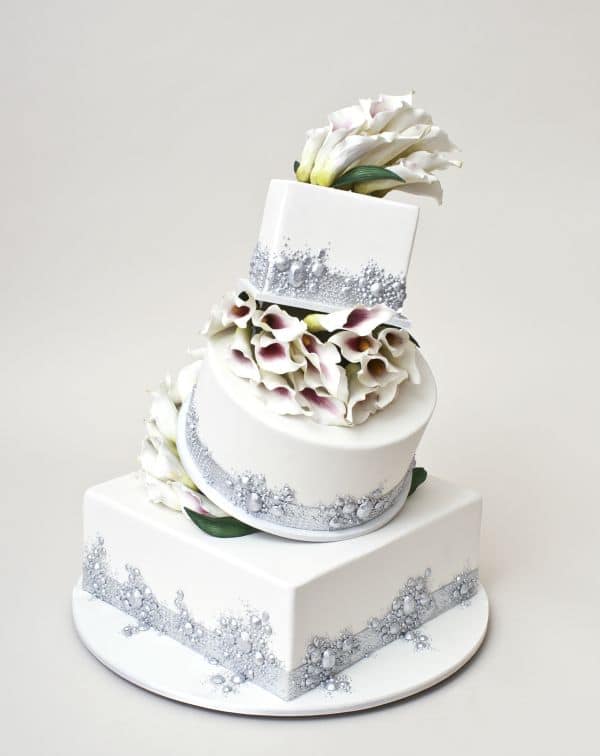 Thelma Tomby:  Every time you have a new order, is it like starting from scratch?

Ron Ben-Israel: It depends.  Look at wedding or bridal designers like Vera Wang, who’s very well known.  She has certain dresses that have always been there because they’re so popular.  A lot of ladies want those dresses, so they don’t change from year to year.  I change up the [cake] photos twice a year, but they see them [an older cake] online or in a magazine, and they ask for it.  Then we don’t start from scratch.  We don’t have to do sketches or technical drawings because we already know [what the cake will look like].

Every season you have new designs, new colors, like in fashion.  Then we have to start from scratch.  Or, if you come in and you don’t have an idea of what you want… that’s what excites me: to start with nothing.  And then we start exploring the whole process.  [Points to Katie Moseman’s pink outfit]  You love pink, obviously, so, can we bring some pink [into the cake design]?  [Points to Thelma Tomby’s eggplant colored top]  Or, eggplant is a very hot color right now.  In March we started doing cakes in blue.

We always have the classics, and then we have the new stuff.  But the one thing I would not do is copy other people’s work.  There’s some very wonderful inventions, or trends, that I like.  But when people bring photos of these, I refuse to do it, because that work belongs to someone else.  Why should I copy? 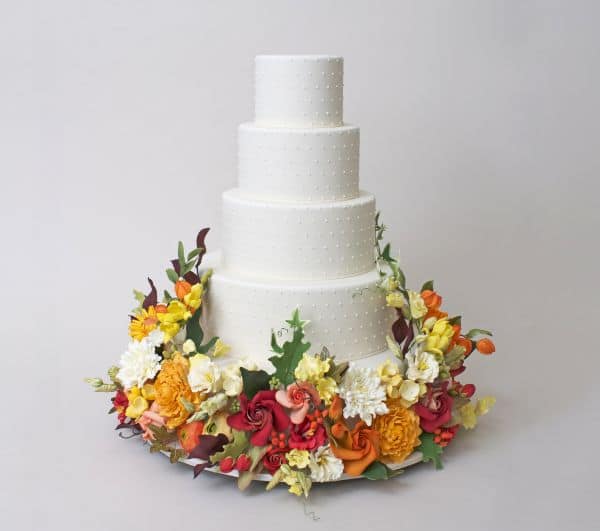 Terri Truscello-Miller:  Do you ever get tired of cake baking?

Ron Ben-Israel:  No, I love cakes!  I love the actual process of baking and making things.  Some days pass with me just meeting clients, or sketching, or ordering and paying bills, or arguing.  [Laughter from the interviewers.]  So I feel miserable because I haven’t done something physical.

It’s a very dynamic profession, and I like it. 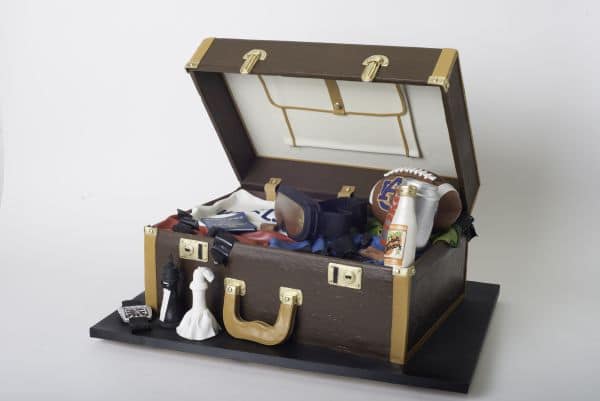 Thelma Tomby:  How do you get the people who work with you to work like you?

Ron Ben-Israel: Oh, they work better than me!  I tried [hiring] people from art school, because I went to art school.  It didn’t work.  Now I only take people who went to culinary school for baking and pastry.  There are wonderful schools in the United States.  There’s the school where I teach called the International Culinary Center.  It was founded as the French Culinary Institute.  We have a very good program there.  But we have people from Johnson & Wales, from the CIA [Culinary Institute of America].

So they first have to go to school.  Then they come to us for an internship, which is extremely important.  In Europe, the way you would actually become a baker or cake decorator would be first to do the internship.  If you were good, then the owner of the business would recommend you to go to school, which was usually state-run.  You couldn’t just go to school because you wanted to change your career, like here [in the United States].  You had to prove yourself in the field.

Here, anybody can raise the funds and go to school, but they still have to go through the process of internship to test the water- to see if it’s really for them. Maybe they think they can do cakes, but they find out that cookies are better, or chocolate.  Some people go to school and then decide to work on TV- there’s a lot of jobs there- or journalism.

My people did both: go to school, an internship with us, and then if I have an opening, I hire them.  My staff stays for many years.  Sometimes I say, “Don’t you think it’s time to go?” but they want to stay! 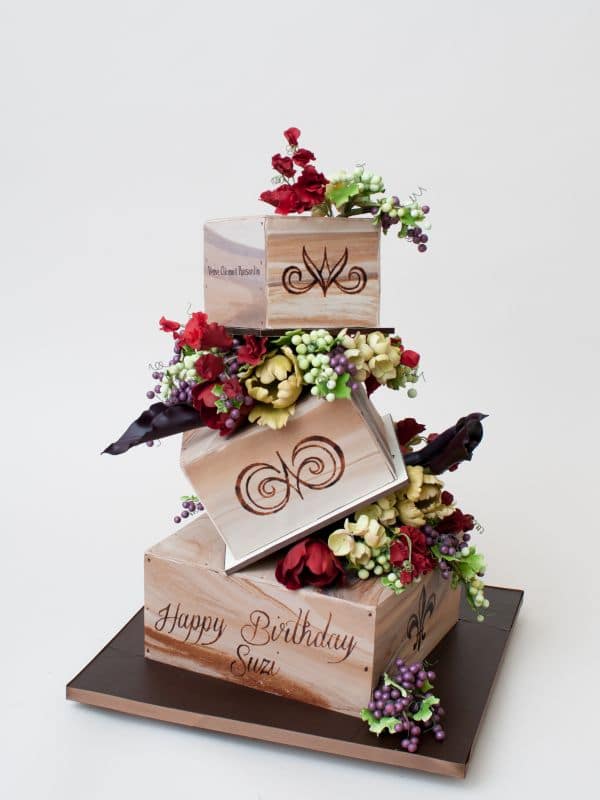 Terri Truscello-Miller:  If you could choose one person to bake a cake for you, which cake artist would you choose today? 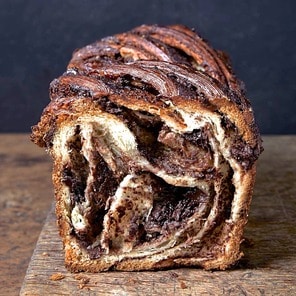 Ron Ben-Israel:  Actually, a friend of mine in New York City, who has a place called Breads Bakery.  They do amazing yeast dough cakes, and he does the most amazing babka, which is Eastern European. 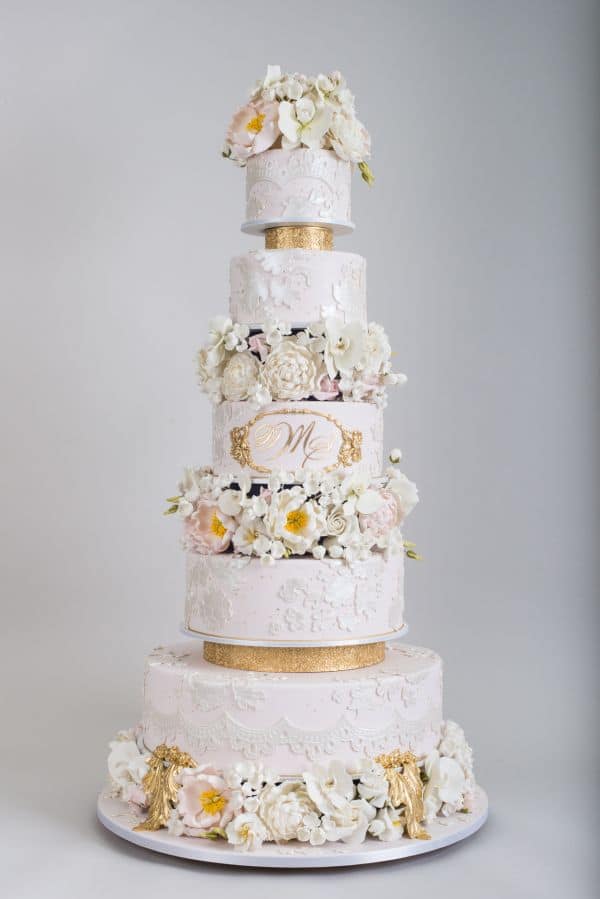 Katie Moseman:  Have you ever thought about writing a book?  What would it be like?

I would love to write a book, but I never seem to have the time or the concentration to do that.  I would combine inspiration with instruction… not just pretty pictures.  I admire people that have books and all that, but it’s a daily struggle to run a business and to manage clients.

September and October are so busy for us, and we have to say “No” to clients, which just kills me.  My staff sometimes comes in at 5:00 am and they’re working for 12 hours, 6 days a week.  I said to them, “Can I hire some additional people?” and they say no, because they’ll have to train them.  So we can’t do it in the middle of the season.

I don’t know when to write a book.  Good friends of mine have written a couple of books, and I’m jealous- but on the other hand, I’m making cakes!

Which cake is your favorite?

What would you ask Chef Ron?