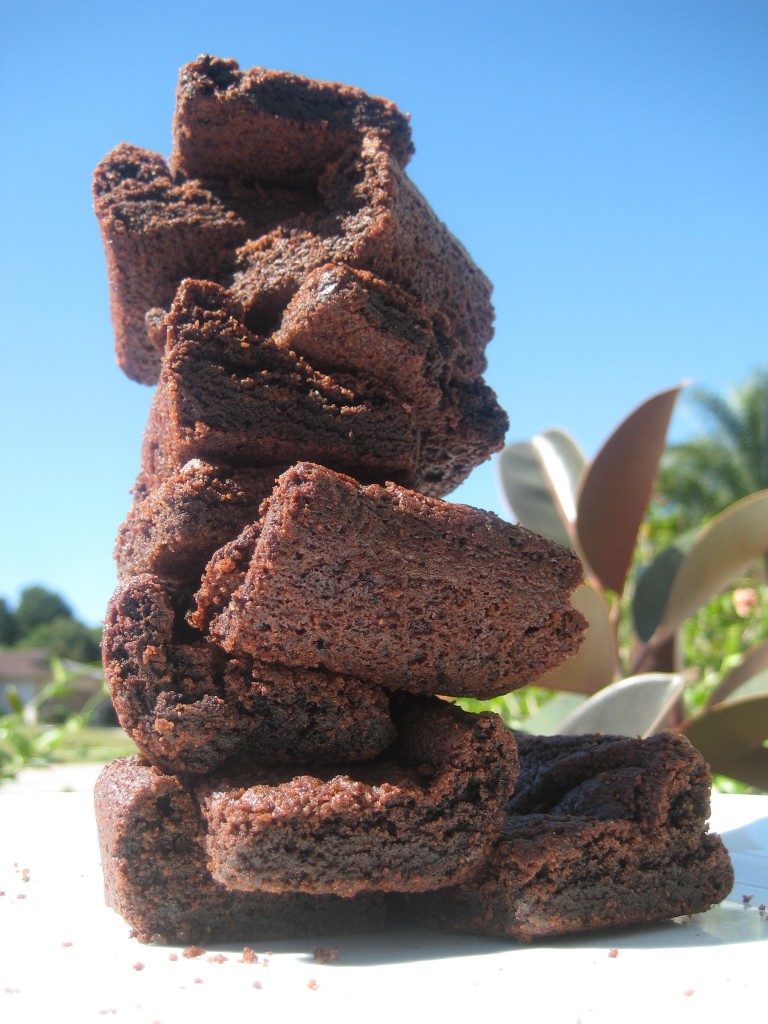 Leftovers from a brownie experiment

Perfect brownies are in the eye of the beholder.  If I had my say, the perfect brownie would also be the chewiest brownie.  Since the very beginning of this blog, I’ve tried to figure out what makes a brownie chewy.

My first attempt was when I baked the Chewy Brownies Recipe from Cook’s Illustrated.  I figured that they were experts and must have already solved the problem.  They were indeed chewier than the average from-scratch brownie, but I found them to be lacking in flavor on a basic level.  Once you added (as they indicated in the recipe) large amounts of mixed-in chocolate, they tasted better, but the plain brownie without mix-ins was somewhat dull.  Plus, they didn’t keep too well.  The day after I baked them, I threw them out.

A Different Kind of Success

A different recipe took me completely by surprise in terms of how wonderfully chewy it turned out.  It was my recipe for White Chocolate Brownies that was simultaneously fudgy and chewy, the most perfect texture I’ve encountered in a brownie.  But when I attempted to replicate this texture with chocolate, I ended up all over the map.

Since the white chocolate brownies contained 8 oz of white chocolate, the next time I simply substituted 8 oz of semisweet chocolate.  I ended up with a brownie that was so dry, it resembled shortbread.  Chocolate- as I later confirmed with an e-mail to Alice Medrich, the Queen of Chocolate- has a powerful drying effect.

The next time, I used 4 oz of semisweet and 4 oz of white chocolate.  The brownies turned out chewy and fudgy this time, but with a milk chocolate flavor.  I named them chewy milk chocolate brownies.

Based on these experiments, I’ve begun to formulate a theory of my own.  Since both the white chocolate brownies and the milk chocolate brownies were chewy without using vegetable oil, something else must be responsible.  I think that sugar is a factor.  In some way, a higher proportion of sugar increases chewiness.  This was true for another mildly chocolate flavored brownie recipe that I once tried, and also true of a spectacular failure I produced while trying to come up with a good brownie recipe for Vietnamese Style Coffee Brownies.  I tried adding a coffee flavored sugar syrup to the brownies, and I got a chewy, sugary, candylike mess.

Therefore, the difficulty is in producing a homemade chewy brownie that also has a strong dark chocolate flavor.

Having seen that chocolate itself was problematic when attempting to produce a chewy brownie, I decided to turn in a completely different direction.

It was hard to tell when they were done, so I may have overbaked them a minute or two, but they were still quite edible.  I wasn’t a huge fan of the flavor, though, because they weren’t salty enough and the reliance on cocoa powder gave them a dull, tannic taste.

I haven’t given up on this idea, but I’m going to try a double chocolate cookie recipe that uses actual chocolate, rather than just cocoa powder.

Help A Baker Out

I’d love to hear your tips or see your recipe suggestions for really chewy brownies with a deep, dark chocolate flavor that doesn’t just come from added chocolate chips and chunks.

I shall not rest until the mystery is solved!

Previous Post: « Basil Double Chocolate Brownies Recipe by @flavorbender
Next Post: QUIZ | What Kind of Brownie Are You? »