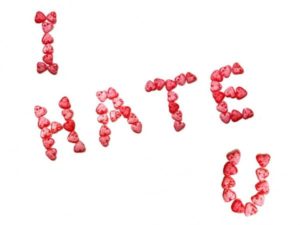 Photo by coscurro of Freeimages.com

A while back  I wrote about a famous brownie recipe that turned out to have been stolen and renamed.  Although I had thought that this particular story would be of little interest to anyone outside the food blogging community, I ended up getting quite a bit of traffic from a mention on a site that I’d never heard of called Get Off My Internets, or GOMI.  The site is dedicated to calling out bloggers for bad or annoying behavior on their blogs and social media accounts.  In this case, the naughty blogger in question was the one who had misappropriated a very unique brownie recipe from another blog.  (Go on, read the whole “Slutty Brownies” story; it’s fascinating!)

The tone of the GOMI ranges from wickedly funny to plain old snarky, and can make for an amusing read if you’re not the blogger in question.  Considering that many bloggers track their traffic as I do, you probably wouldn’t be able to help reading about yourself if you knew you were being discussed.

I decided to spend a little time on GOMI to find out the reasons (other than outright theft)  why particular bloggers get singled out for extreme dislike.   After lurking in the forums for a while, I think I’ve picked up a few things that irritate the lively GOMI crowd.  I’ve used that knowledge to make a helpful how-to list for all you bloggers and blogger hopefuls out there.

The Seven Deadly Sins of Blogging

1.  Make a living from your blog, then complain about how much work you do.

Because everyone who’s out there working at Macy’s or McDonald’s really wants to hear about how your job is so difficult.  Especially the part where you have to deal the stress of taking photographs, getting swag, going to neat places, and eating fine food.

2.  Use your small children to drive traffic or get advertising.

Got a corporate sponsor?  Put some logo t-shirts on the kids and get them to pose for photos.  Don’t feel like writing a post on your blog topic?  Fill it up with artful snaps of the children, preferably when they’re covered in something visually interesting, like mud.

Who needs a bath when you could be posting all those shots on Instagram?

3.  Use annoying catchphrases or nicknames.

Rachel Ray is famous for “Yum-o,” and Emeril’s famous for “Bam,” so why should you restrain yourself?  Every paragraph can use a touch of “Amazeballs!” or “Fabulous!”  You get bonus points if your native language is English but your catchphrase is not.

Also, don’t call your spouse “Bob” or something pedestrian like that.  Opt for something clever like, “Mr. Perfect Brownie.”

Do you hold a special hatred for those of a different national origin, skin color, religion, or sexual orientation than you?  Then make sure that you provide your opinions on all of the major news stories of the day.  Do you believe that aliens abducted you in order to teach you how to make a ham sandwich?  Share!  After all, your readers need to know your opinion on absolutely everything, even if you normally blog about DIY tea cozies.

Why write, “I made some pancakes this morning,” when you could write “As the gleaming orb of dawn rose quietly into the aqua sky, I stirred the trembling batter, cauterized each cupful in a sizzling pan, and finally served each pillowy round with a delicate drizzle of pure maple syrup.”

6.  Glom on to a social cause without actually doing anything.

First, make sure that you write about a tragedy as if you really, truly understand what the victims or their families are going through.  At the same time, focus on how it makes you feel, because that’s obviously what’s most important.  Second, use cause-related hashtags freely, even if you’re not actually accomplishing anything, because what counts is that you’re totally “involved.”

And finally, the deadliest sin of all:

Why write original content when you can put up four or five sponsored posts in a row?  Better yet, don’t bother to post at all for a while, except for existential complaints about how hard your life is (see also #1).  Because who cares what the rabble are reading, so long as you’re getting paid?

Congratulations!  Now everyone hates you.  Hopefully, you’ve already made a large pile of cash from selling out, and now you can stuff some of it in your ears to drown out the cries of derision echoing from your comments section- if you were brave enough, foolish enough, or masochistic enough to leave it on.

I should hope not.  I’ll freely admit, however, that I do wander off from brownies occasionally to share my questionable viewpoints on blogging in general.  Oops!

Anyway, let’s hear from all of you out there.  What’s a deadly sin of blogging that I’ve missed?  Do you agree or disagree on the ones I’ve picked?   (You could also point out that another deadly sin of blogging is to blatantly fish for a comment by asking a question at the end of a post.  Or is that supposed to be a best practice?  I can never remember…)

Have a Happy (and hater-free) New Year!

I’ve read quite a few times that you think no one credits you for ideas, but you got credit in the first paragraph.  If I’ve earned a GOMI, then at least I’ve earned it honestly. 😉