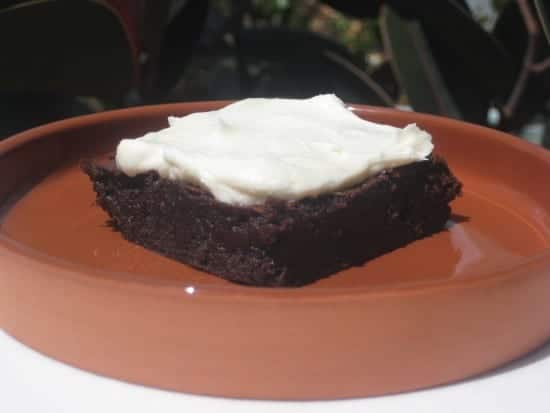 You can thank Anthony Bourdain for this.

After reading his excellent book, A Cook’s Tour: Global Adventures in Extreme Cuisines

, I really, really wanted to try Vietnamese food.  Luckily for me, a new Vietnamese restaurant had opened within driving distance and was getting great reviews.  When I went there on a date with my husband, I think I ordered just about everything on the menu.

Thankfully, my husband is used to this.

Given that I never pass up dessert, at the end of the meal I ordered the flan and a glass of the Vietnamese-style iced coffee that Bourdain had described so sensuously in his book.  Swirled through with sweetened condensed milk, the coffee was a joy to the eyes and the palate.

Ever since then, I’ve had the idea kicking around in the back of my head: “How can I get that flavor into a brownie?”  Well, last week I started making attempts- and let me tell you, they weren’t all successes.  First, I tried swirling together a coffee-flavored brownie batter and a sweetened condensed milk-flavored batter.  The milk made it dense and cakey.  Next, I tried a fudge brownie filled with a layer of coffee caramel and sweetened condensed milk.  It looked neat with a contrast of drizzled milk on top, but it was so sweet and candy-textured that it made my teeth hurt.  Plus, the sweetened condensed milk didn’t have the right flavor after being cooked.

After one cakey and one fudgy brownie attempt, I decided that the best texture for the brownie would be fudgy and soft, yet not candy-like.  An earlier experience with Alice Medrich’s Best Cocoa Brownies came to mind.  I decided to tweak that recipe with coffee, and create a sweetened condensed milk frosting to go on top.  If you’d like to learn more about how to brew your own Vietnamese-style coffee- perhaps to drink it with this brownie- then check out my tutorial on how to make Vietnamese coffee..

I typically avoid the use of coffee as a flavoring in brownies.  Some people feel that it boosts the chocolate flavor, but to me, it just tastes like you’ve added coffee to a brownie.  So, in this case, in which coffee is a desired flavor, I’ve used a light touch of coffee.  If you prefer a stronger flavor, you can substitute 1 1/2 teaspoons of instant espresso dissolved in an equal amount of hot water.  This recipe works fine with either natural or Dutch-process cocoa.

These coffee brownies are soft and fudgy without being too dense.  In each bite, the subtle coffee flavor is gently enveloped by the light, milky taste of the frosting.  The combination is rich: it requires only a small portion to feel completely satisfied.

If frosted, cover and refrigerate.  Unfrosted brownies may be stored at room temperature, tightly wrapped.

One of the richer brownie recipes I’ve yet tried.  Frosting a brownie may be gilding the lily, but I like how the frosting adds to the unique character of this coffee brownie recipe.