You’ll love these easy and fun spider brownies!  All you need to make these spider brownies are brownies, frosting, and a few candies. Excellent for parties! 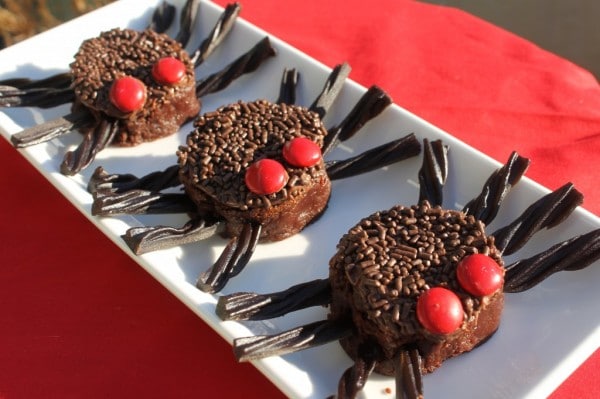 For holidays, I like to take shortcuts.  The simpler the prep, the better!  Halloween may be scary, but getting ready for it doesn’t have to be.

These spider brownies are very simple.  All you need are some brownies (homemade or store bought), some chocolate frosting, and a few candies.  This is the kind of recipe that’s so easy you can have the kids make it for you.

It’s a fun activity to do on Halloween while you’re waiting for the sun to go down far enough so that you can head out to trick or treat.

I used licorice legs for these spiders because of the dark color, but you can just as easily use pretzel twigs or something similar.  Ditto for the candies.  I used red M&Ms, but you could use anything as eyes—red hots, candy buttons, etc.

If you’re short on time, simply grab everything premade at the store.  A can of frosting, a slab of brownies, and you’re good to go.  Or you can go the homemade route and make the brownies and frosting yourself.

I was actually inspired to make this set of spider brownies by a Doctor Who-themed cooking event called the “Time Lord Chefs.”  Several Doctor Who fans (including me) created unique recipes inspired by season 8 of Doctor Who.  You will be amazed by the creativity!  Check out the recipes here:

Trivia fans will note that the episode “Kill the Moon” featured large spiders with glowing red eyes.  These spider brownies are much less scary, and they are (presumably) much, much tastier.

If you’re a Doctor Who fan, you’ll also enjoy these Bow Tie & Fez Cupcakes.  For a sweet Halloween, you might also like Pumpkin Brownies Baked in a Pumpkin, or some Pumpkin Bread Pudding.

I hope you have a fantastic Halloween and your candy bucket is filled.  Enjoy eating some spiders—spider brownies, that is—and I’d love to hear about your favorite Halloween recipes! 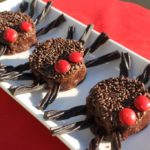 Also play this math game—made with a pan of brownies!