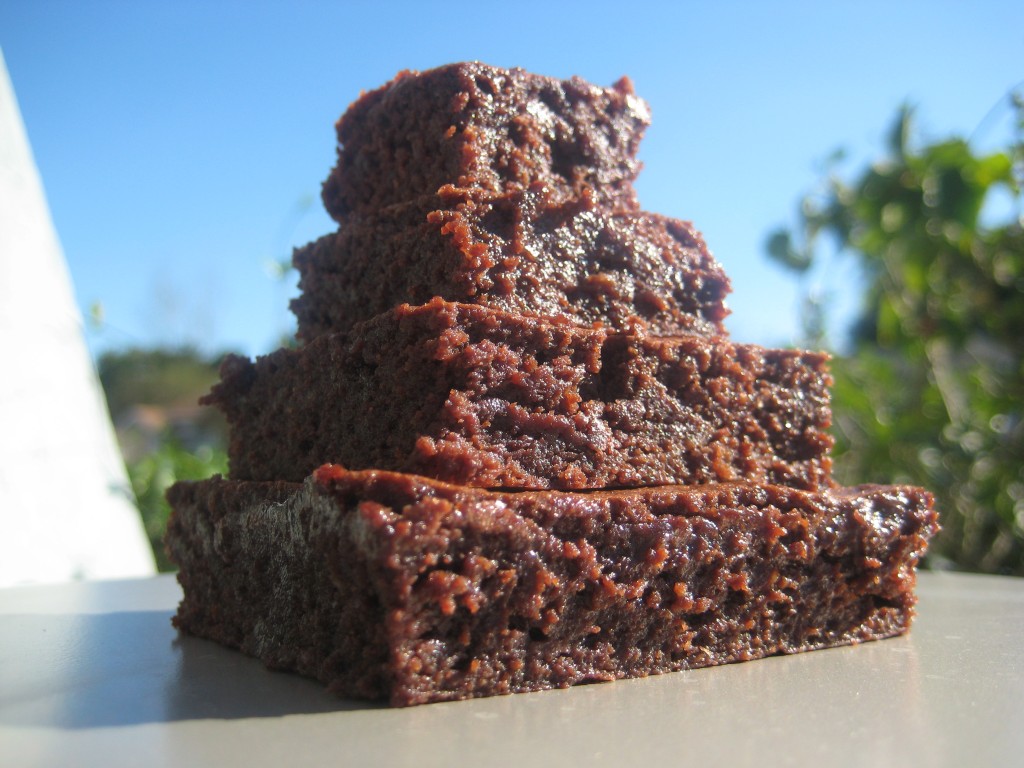 Does adding extra eggs to brownies make them chewier, cakier, or something else?  Today, I decided to find out.

I took the most classic brownie recipe in my repertoire, a traditional chocolate brownie recipe, and added two whole eggs.  This brought the total to four whole eggs in a recipe for an 8 inch square pan.

I had previously read that adding extra eggs to a brownie recipe will make it cakey.  In fact, the very first recipe that I baked for this blog was a chocolate brownie cake, which- with three eggs- is the only recipe so far to include more than two eggs for its pan size.  So I’m thinking that it might just be true.

However, in my search for the chewiest brownie, I’m willing to try anything.  Eggs provide structure in baked goods, so maybe they will do something for the chewiness of the brownie.

I made the recipe, and even though it contained absolutely no leaveners such as baking powder or baking soda, the brownie batter rose like crazy during baking.  When eggs are stirred into a batter, they catch and hold a lot of air bubbles, so that’s the most likely explanation.  I was also very careful not to overbake the brownies, because just two or three minutes of overbaking can ruin the texture of brownies.

The resulting “brownies” were very interesting.  The top was smooth, firm, and springy like a cake.  The edges were similar to a dense chocolate cake, but a bit on the dry side.  Moving closer to the middle, the texture was more like a flourless (or almost flourless) chocolate cake.  I removed about half an inch around the edges, then dished up small squares for visiting family members with a dollop of freshly whipped cream on top.  Those squares were served warm, and they pretty much just melted in your mouth.  They were really, really good, but not what anyone would call “brownies.”

So there you have it.  Adding extra whole eggs to a brownie recipe will indeed make it cakier- but if you watch carefully, and don’t overbake, you’ll still end up with a really delicious dessert.

Same chocolate brownie recipe, but with two extra egg yolks, bringing the total to two whole eggs and two egg yolks.  I’ve read in several places, including the back of my unsweetened chocolate box, that adding an extra yolk will make brownies more fudgy.  Maybe two extra yolks will make them double fudgy!  One can hope, right?

This time, they were definitely fudgier than usual.  There was a definite egginess to the flavor as well.  In fact, I’d say that an analogy is in order.

Both are good.  However, if you prefer a more richly egg-flavored sweet, you’re going to like French vanilla ice cream and extra egg yolk brownies.  I suggest you top one with the other.

Darn, I shouldn’t write about this at this time of night, because now my stomach is rumbling- and Mr. Perfect Brownie finished the last of the egg yolk brownies a few hours ago.

I will just have to compensate by baking more brownies tomorrow.  I don’t know about you, but I’m really intrigued by this brownie pan that makes more of those deliciously chewy edges.  Have you ever tried it?

PS: Find out what I learned about adding extra flour to brownies, or get my best brownie recipe!