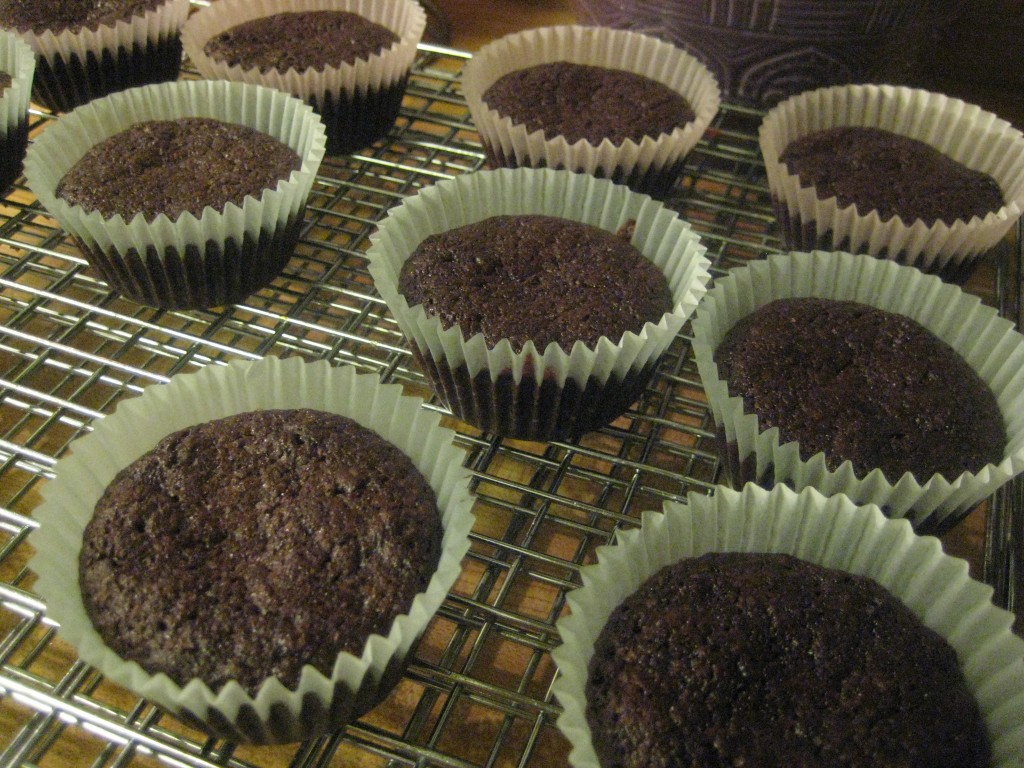 Where’s Mr. Wizard When You Need Him?

For the past few weeks, I’ve been pursuing my personal holy grail of brownie-making: the ultra chewy brownie.  Since I was raised on the Mr. Wizard TV show, I approached the problem scientifically.  I went through several experiments using different ratios of ingredients.

I finally figured out that adding extra sugar was the secret to making a brownie chewier.  I even tested the same recipe to see if it would work to make chewier cocoa brownies, and it did.

Many times, I’ve wondered if baking the brownies in a muffin pan would be even better.  My rationale was that the ratio of chewy brownie edge to fudgy brownie middle would be tilted in favor of chewy if the brownies were baked in individual tins.

So I decided to experiment by baking the classic chocolate brownie recipe, slightly altered with an extra 1/4 cup of sugar for supreme chewiness, in a muffin pan.  I thoroughly buttered each tin in hopes that the brownies would slip right out.

I couldn’t have been more wrong.  As it turns out, the property of chewiness is strongly associated with the property of stickiness.  I had to use a spoon to dig each one out of the muffin pan, and lost a good chunk of each in the process.  Clearly, butter was not going to cut it.

The next time, I used fluted paper liners, but had the same problem.  I could peel off the liner, but I lost the sides and bottom of the brownie.  (Updated Next Day: This happened the day of baking, but by the day after, I was actually able to carefully peel it off without tearing up the brownie.)

I know that many bakers are now shouting at the screen, “Why didn’t you use nonstick spray, you dummy?”

Or maybe you’re all much more polite than that.

The simple answer is that I really, really don’t like the taste.  When I bake brownies in a pan, I always line it with parchment paper after buttering the pan to make the paper stick.  I do it that way because it avoids the weird aftertaste of nonstick spray and the occasionally odd effects that aluminum foil can have on bake time.

I sent out a tweet for help regarding paper liners, in hopes that a non-fluted liner might be less sticky, which led to a very kind recommendation by blogger Raymanda of British Mum USA that I try Sur La Table, which does in fact carry several designs of non-fluted liners.

Of course, I’ll need to order some of those before I can report on the results.

This may seem like nitpicking, but when you’re on a quest for the perfect brownie and that’s all you write about, you tend to get a little obsessive.

Let me backtrack a little and explain to you why I’m not the world’s biggest cupcake fan.

I adore cake.  Give me a homemade cake of just about any flavor, and I’m a happy woman.  However, drop that very same batter into cupcake tins, and I won’t like it anywhere near as much.

Why?  Because the texture is not the same.  Cupcakes always taste drier and tougher than the interior of a full-sized cake.  And I’m not talking about my own amateurish cupcakes, either.  I mean professional, perfectly baked, expertly made cupcakes.  There’s too much edge, and that changes something.

I thought that this would work to my advantage when trying to bake a super chewy brownie, because of course you’d have more chewy edges, right?  But something about this just doesn’t work.  I wish I could get Harold McGee or Alice Medrich to come over and explain this to me, because I’m sure one of them would know how to explain this properly or even scientifically.

I’m thinking that it has something to do with the speed at which the batter comes to temperature and the different duration for which it remains at temperature.  Plus, I have the feeling that a given square inch of brownie is also affected by all of the other brownie batter around it.  I think that this somehow this affects the rate and type of cooking that occurs.

Science Is Cool (And Delicious)

I need a food scientist for this, I really do.  But until then, I’ll just have to keep following the scientific method.  I’ll hypothesize, test, and describe my conclusions as I go.

I experiment so you don’t have to.  Aren’t you lucky?

But I’m the one who gets to eat all the brownie fails.  Hmm… maybe I’m the lucky one.

Until next time, kiddos- but keep me posted on your own adventures.  And if you have any recommendations, I’m all ears, so please comment below.

P.S.  And as a reward for reading this really long post, go make yourself some Incredible White Chocolate Brownies.  Really, you deserve it.